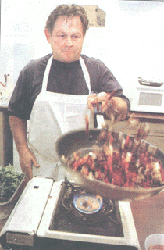 Michael Passalacqua makes no bones about his culinary training.

“I’m not a chef,” he declares while assembling the ingredients for his marinara. “I’ve never baked bread from scratch. But I do know how to make a sauce or two.”

His opening line draws smiles and chuckles from the 40 or so folks attending Septembers Healthy Weigh cooking class at the Cameron Wellness Center. They are here to learn the secret to making great pasta, the kind dished up daily at Angelo’s Restaurant in Washington.

Passalacqua may not be the product of a prestigious cooking school, but as the owner of Angelo’s he knows a thing or two about Italian food.

And he can cook it, too.

Passalacqua elaborated later in a telephone interview, attributing his culinary know-how to the years he spent growing up in the West Chestnut Street restaurant, started in 1939 by his grandparents, Angelo and Giacomina Passalacqua.

“You watch, observe, and if your around it enough, you feed off it,” he said. He picked up a bit from the cooks who worked there, and eventually became a pinch-hitter in “emergency situations.”

“I always like to say, if you come in here and see me with a white coat on, it’s a really bad day,” he said with a good-natured laugh. “That means about three people didn’t show up for work.”

On a couple of butane-powered hot plates in the conference room’s makeshift kitchen, Passalacqua whipped up with amazing ease several of the trademark dishes that have made his West Chestnut Street landmark so popular: Pasta Lacqua, Pasta Patricia, Pasta Colonna, and Pasta Primavera.

Best of all, he shared his recipes.

“This marinara is very, very simple to make,” Passalacqua said as he demonstrated the first of five dishes of the evening. “Anyone can make it at home in less than an hour.”

The affable restaurateur shared cooking tips and his picks on everything from cookware to brand of tomatoes. All the while, he bantered with resident nutrition counselor Nicolle Bazant, who chimed in every now and then with nutrition reminders. This was, after all, a class on creating healthy food.

Bazant suggested substituting margarine for the butter called for in some of the recipes.

Moderation is important. Bazant said a normal serving of pasta is one cup, which amounts to only about 60 calories.

“Typically, we’re getting a half-pound serving when we eat out. The portions are just too big,” she said outside the class.

Pasta is low in fat, cholesterol, and high in complex carbohydrates, protein, B vitamins, and iron. Rich in Vitamin A, lycopene, and lutein, most tomato-based sauces are low in calories. But beware of commercially prepared sauces, which are high in sodium. Bazant suggested creating sauce from tomatoes containing little or no salt. Instead of adding salt, use a spice such as celery seed or the herb lemon grass, both of which offer the flavor without sodium.

Passalacqua and Bazant were divided when it came to the subject of rinsing pasta.

From a culinary standpoint, Passalacqua advocates the practice, as it stops the pasta from cooking and prevents clumping.

Nutrition-wise, skipping the rinse retains complex carbohydrates, Bazant said. Some cooks who opt to rinse save the pasta water to reuse for stock: The starch proves useful as a thickening agent. Some use the water to steam vegetables.

As for the marinara recipe’s 6 ounces of oil, Passalacqua said health conscious cooks certainly could use less without affecting the result. Simply add more tomatoes or water and cook longer.

As he sautéed garlic in the oil for the marinara, Passalacqua shared a few tips.

“Cook the garlic till golden and it becomes very pungent,” he said. If the garlic is overcooked, the sauce will lose that layer of flavor.

“Marinara should be meaty, meaning thick from tomatoes,” he continued. “Good brands of canned tomatoes are Contadina, Hunt’s, and Furmano. Don’t buy reconstituted tomatoes. You want whole tomatoes with texture, not ground or pureed. At the restaurant, we run plum tomatoes through a processor. At home, I smash them with my hands.”

As the marinara simmered, Passalacqua turned to the sauté dishes, starting with Pasta Lacqua, developed by his sister, Tonne, while she was the executive chef at Angelo’s.

“I consider myself a lazy cook,” he said. “I like to make more than one thing in a skillet. Sauté is a simple way to cook a very nice dinner for your family. Once you understand the basics of sautéing, you can substitute the ingredients and make your own dishes.”

The procedure for all four of the sauté dishes he prepared is the same; only the ingredients change.

Sautéing green beans in butter, he lifted the nonstick skillet from the heat, deftly flipping the vegetables for even heating. At home, Passalacqua said he prefers to use nonstick cookware. “At the restaurant, we have dishwashers,” he joked.

“Don’t be afraid to lift the pan up off the heat to reduce the heat,” he said.

While the beans were hot but not soft, he added white wine to “shock” or slow cooking. The heat removes the alcohol while leaving behind the flavor of wine.

Next came the chicken stock – Passalacqua likes homemade or College Inn – and tomatoes, which were cooked down to sauce. To speed thickening, add cheese.

“It’s strictly up to you what you want to use in the sauté dishes,” he said. “Use whatever you have around.”

Cooked pasta was the final ingredient to be incorporated into the dish.

“When you cook pasta, try to cook al denté before you add to the mixture,” he said. “If it’s yellow, it’s still raw. When it whitens, it’s cooked.”

Passalacqua explained his readiness test for adding pasta to a sauté dish. “As soon as you can bend it without breaking, it’s ready. If you cook until it’s done and add it to the mixture, the pasta will be overdone.”

Pasta can be cooked ahead and refrigerated, he said. Cook to al dente and shock in cold water. Place in a plastic container with a little oil and chill immediately. It should be kept for several days.

Another pasta hint: When serving pasta with a marinara, place the pasta in a sauce pan with a little sauce to remove any traces of water.

“I haven’t been in a kitchen in a long time,” he admitted when the class ended. “I learned this side (of the business) because I had to. If I can do this, anybody can.”