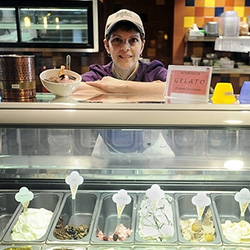 Cheryl Martin is mad for gelato, or “Italian ice cream.”

So much so, in fact, that the pastry chef traveled to Italy earlier this year with the gelato guru himself, Malcolm Stogo, founder of Ice Cream University and renowned expert on all things frozen.

There, she visited the world’s largest gelato trade show in Rimini, and brought back new ways to wow fellow gelato junkies at Angelo’s Restaurant, where owner Michael Passalacqua considers her to be a gelato genius.

She enjoys dabbling with different flavors and add-ins, and at the time of our interview, was working on a new five-inch gelato cake that since has become quite popular with customers. She also was experimenting with heart-shaped gelato pops created from molds she picked up in Italy.

Cheryl had the privilege of making gelato from scratch at a workshop at one of Italy’s finest gelaterias – or gelato cafés – La Sorbetteria in Bologna.

But by far the best thing she brought back was the knowledge that the gelato being dished up at Angelo’s is every bit as authentic as the gelato she sampled in Italy’s ubiquitous gelaterias.

“It was confirmation for me that the gelato I’m making here is truly gelato,” she said.

Gelato often is mistakenly referred to as ice cream, but its flavor profiles are distinctly different as a result of three factors: fat, air and serving temperature.

Air, or overrun, is whipped into ice cream, and is aided by the high proportion of cream in its base. High-quality ice creams have about 25 percent air, while cheaper commercial versions contain between 50 and 90 percent air. Gelato, on the other hand, is churned at a much slower speed, resulting in little air and, consequently, a denser, softer texture.

For optimal flavor and texture, gelato is served at 10 degrees. Any lower, and it loses that desirable soft-mouth feel and intense flavor. Ice cream, in contrast, is stored at between 5 degrees below zero and zero.

Nutrition-wise, gelato contains less fat than ice cream, resulting in fewer calories. However, diet-conscious beware: Additional ingredients, such as chocolate chips, toffee, caramel or fudge, will drive up those fat and calorie numbers.

A few bites into the interview, it’s revealed that while commerically made gelato is readily available locally, Angelo’s is the only restaurant in the Washington area making its own, marketed as Mia Zia’s, or “my aunt’s,” Italian ice cream. Cheryl creates every batch at Angelo’s using fresh ingredients (with the exception of the flavor paste) and a gelato freezer that sits behind the dipping cabinet at the restaurant.

“In our region, it is just still an untapped market,” Passalacqua said. “People just don’t know about it.”

Despite being advised against it, Passalacqua decided to incorporate a gelato café into his building plans when he moved the restaurant to its current location near Consol Energy Park in North Franklin Township in 2008.

He’s glad he didn’t listen to his detractors.

“My basic idea was that it’s Italian, it’s different, and nobody else has it,” Passalacqua said. “I knew it would be very popular with children. It really has helped embrace the young family business as well as grow another generation of young Angelo’s guests.

“I think we’re now about to hit stride.”

Owner of Angelo’s named Pa. Restaurateur of the Year for 2009
Scroll to top