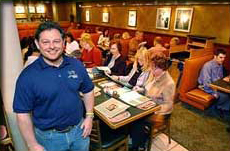 And while these dinners reflected noble efforts to feed multitudes of homeless folks, it left him feeling twinges of despair to see volunteers ladling turkey glop onto paper plates for the homeless to eat with plastic utensils.

It made him wonder: Why shouldn’t these people have one day a year when waiters and waitresses serve them high cuisine with all amenities and ambiance of fine dining?

Those news reports were an inspiration to Passalacqua.

As owner of Angelo’s Restaurant, 955 W. Chestnut St., Washington, he called Washington City Mission and other social service agencies and worked out plans to serve a Thanksgiving feast inside his restaurant to the homeless, needy and downtrodden.

It was a novel idea a decade ago, as it is today, to treat the needy as one would upper-crust patrons. But the idea caught on.

Passalacqua, City Mission and other service agencies will serve their 10th annual banquet to as many as 400 people in Angelo’s Restaurant from 1 to 5 p.m. Thanksgiving Day.

City Mission provides and cooks the food. The Spring House restaurant in North Strabane and Krency’s Bakery in Washington donate baked goods. Other people and businesses donate turkeys, and Passalacqua’s customers have chipped in $400.

Once the food is prepared at the City Mission, it’s taken to Angelo’s where his cooks give it that restaurant flair. It’s served buffet-style, inside the restaurant while a wait staff of volunteers serves drinks and desserts.

This year, Kathleen Belack, of Peters, and her family are preparing 24 table centerpieces.

The only thing lacking is a check at meal’s end.

The result is arguably the finest dinner served to the homeless, downtrodden and working poor in the region, if not the nation. It’s one of a kind, organizers say.

David Dunn, Washington City Mission director of development, said none of the 290 members of the Association of Gospel Rescue Missions, which will serve a half million Thanksgiving meals, rivals the local plan, which unites local social service agencies to serve a veritable feast to the needy at a premiere restaurant.

“To see the smiles on people’s faces who sit down and relax in an environment that’s nonthreatening is a wonderful thing for the community,” he said.

So many people volunteer to help that City Mission officials recruit them for other mission projects. The dinner does require 50 volunteers to transport people to the restaurant on shuttle buses and serve as waiters, cooks and coordinators.

But after 10 years, volunteers have reduced it to culinary science. It takes about 10 hours of preparation before the feast is served. Then for a heart-warming, belly-bulging four hours, people dine on sumptuous food and experience some holiday high life.

“They eat a lot of food,” Passalacqua said. “They pile it up and put it away.” Some diners get a bit carried away and ask for a beer, he said. “That’s been tried once or twice.” No alcoholic drinks are served. But that’s the only restriction.

“There’s always someone here whose life situation is so adverse I can’t help but think about them,” he said, noting the time they had to put one disabled guest’s dinner into a blender so he could eat it.

“It’s the old adage, ‘There but for the grace of God go I.’ Most of us on a daily basis don’t come into contact with people with emotional or physical problems or people who sleep in the streets.” When Thanksgiving dinner is served at a fancy restaurant, confusion can occur.

One year, Passalacqua noticed people lined up for the buffet wearing tweeds, khakis and designer shirts, but he was too busy to investigate. After the people had eaten dinner and had dessert, Passalacqua greeted them. That’s when they asked for the check.

As it turned out, they had stopped at Angelo’s, thinking it was open for business, got in line, ate their meals and had a grand time. Told it was a dinner for the needy, the embarrassed diners donated $75 to the cause before heading home with full bellies, good spirits and a grand tale to tell friends and relatives.

“Anyone who shows up, we’ll feed,” he said, noting most people sign up through social service agencies.

Another favorite story occurred when a teenage volunteer took time to dine with an elderly lady who lived alone and was eating alone in Angelo’s. The two ate together and had a long talk about their lives. It proved to be a surreal moment for both, displaying how the dinner can have a profound impact on volunteers and diners alike. The number of people served at Angelo’s fluctuates, but about 3,000 have eaten there since the feast began in 1994. The annual count ranges from 300 to 600, with plans this year to serve about 400.

That will require 200 pounds of turkey, 75 pounds of mashed potatoes and 400 pieces of pie.

After guests fill their plates in the buffet line and take a seat at a table, waitresses and waiters serve them non-alcoholic drinks of their choosing. Waiters come by afterward with trays of desserts from which each can choose. Some choose two.

“The dessert just flies,” Passalacqua said. But how can a classy Italian restaurant offer a turkey dinner without Italian fare? With that in mind, he’ll serve Angelo’s style penne pasta with sauce this year.

His grandparents, Angelo and Giacomina, opened a tavern at the location in 1939, and it was a favorite hangout for glass and steel plant workers. In time, the Passalacquas began serving spaghetti and Italian bread, and named their restaurant The West Chestnut Spaghetti Inn.

After Angelo died in 1953, and Giacomina retired in 1958, Passalacqua’s father and aunt took charge, changing the name to Angelo’s in their father’s honor and expanding the menu.

When Passalacqua began working with his parents, he served even more inventive Italian cuisine. Today, Angelo’s offers lunch and dinner, and, he says, the restaurant business is strong after surviving a bad economy.

But the feast has nothing to do with business and everything to do with making people — volunteers and diners alike — feel physically, psychologically and emotionally fulfilled.

“It’s wonderful food and a great day,” Passalacqua said. “It does the trick of making you thankful for your blessings, and convinces you not to whine and moan over silly stuff.